Have you got a squished and stretched image inside Neat Video’s window? Or maybe even two such images one above another? There is nothing wrong with your footage or Neat Video and your denoised video will not look anything like that. It just means that you are likely working with interlaced footage.

Interlaced and progressive scan types are used in two corresponding formats of a video representation.

A progressive video clip contains a set of frames, each of which shows the whole image of the scene, with all its scan lines present in each frame.

Interlaced video format is traditionally used in broadcasting as such video can be transmitted more efficiently, with less required bandwidth, as compared with a progressive format.

The downside of interlaced format is that it can result in a “comb” effect and make the image seem blurry in scenes with fast motion. 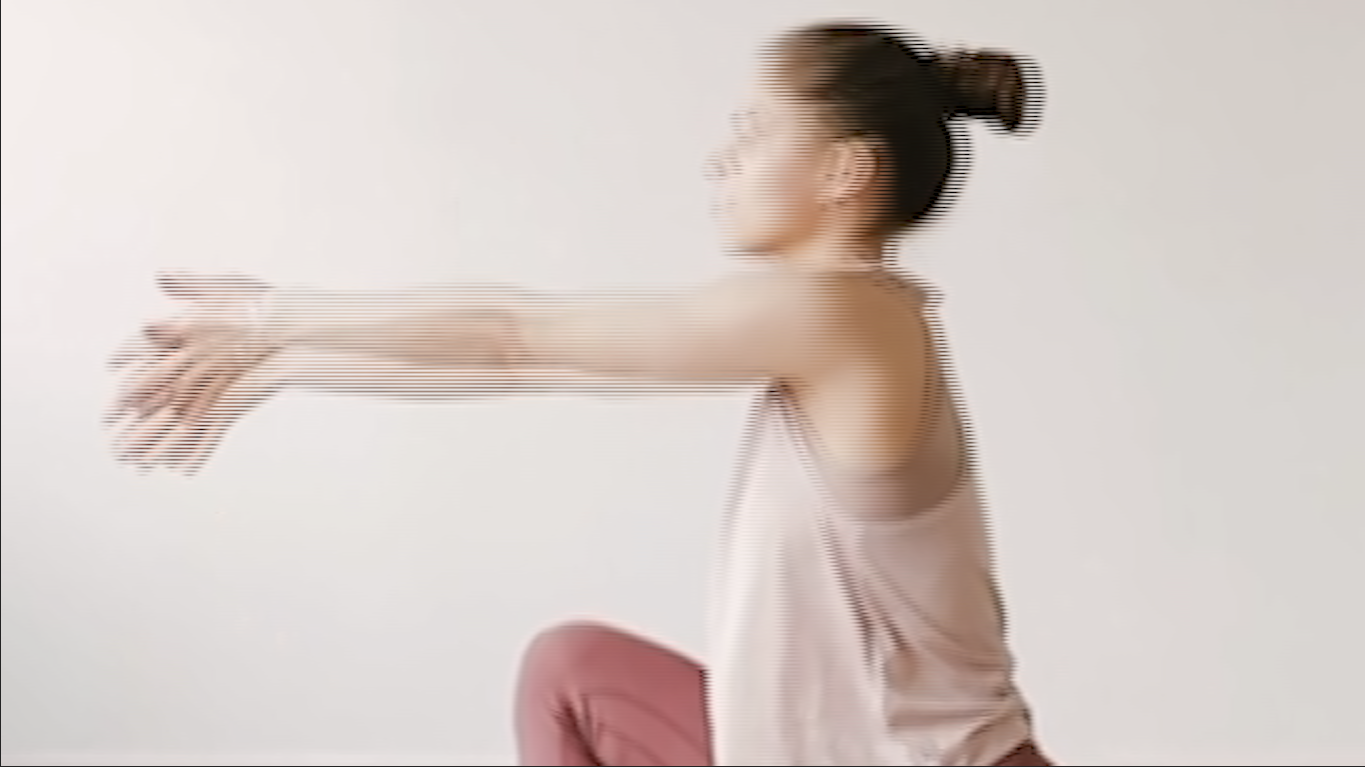 That happens because each field is captured at a slightly different time and, if the object in the scene is moving fast, then it appears in different positions in consecutive odd and even fields. For example, moving cars, sport players, planes on the runway, etc. can appear blurry or have motion artifacts if filmed in interlaced format.

A progressive format, on the other hand, captures the whole picture in a single frame at one moment in time. Hence it shows no temporal artifacts that are typical for interlaced video.

How to find out the scan type of a clip

Not every video editing software or video player can provide you with the information on the scan type. One of the universal ones that work on Windows, macOS, Linux Mint, Ubuntu, Android and many others is MediaInfo. Once downloaded, start the program, click < Click here to select file > and, as the name suggests, select the file you’d like to check.

MediaInfo will show the file’s metadata. You are after Scan type. Scan order is also important for interlaced video. 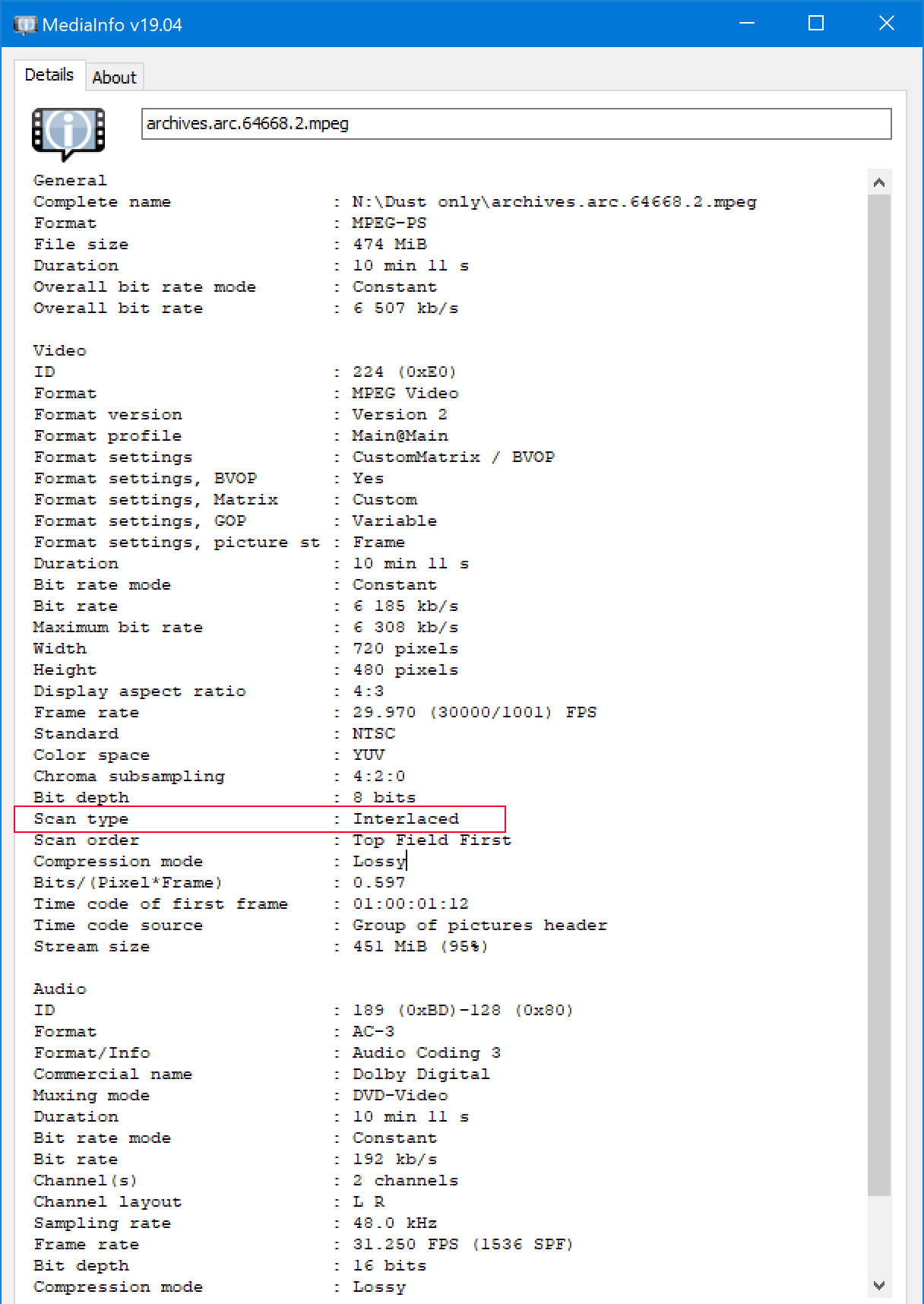 Generally, it is best to apply Neat Video noise reduction to the original video data (be it interlaced fields or progressive frames), not to the data that have been converted from one scan type to another (deinterlacing).

For the best quality noise reduction try sticking with one scan type throughout a project. So if you have interlaced source clips, then your project/timeline/sequence should probably be also interlaced whenever possible.

When you can choose the point in the workflow where you change the scan type (if you have to change it), then choose to change it at a later stage, already after Neat Video is applied to the video, or even after the video with Neat Video applied has been exported (in interlaced format). This way you can let Neat Video work with the interlaced video data and denoise that data in its original interlaced format. This can avoid the potential loss of noise reduction quality that may be caused by using the converted (deinterlaced) data.

When working with interlaced clips and projects, also make sure the scan order (or field order) of the clip and the project/sequence are matching, otherwise, the final video will be twitching. The field order of the clip can be determined with the help of the MediaInfo app. The field order of an interlaced project/sequence can be adjusted in most video editing software (more on that below) to match that of the source clip.

Most OpenFX and interlaced clips

We all sometimes convert the video from interlaced to progressive when working with originally interlaced footage but need to keep in mind that there is a chance of losing details along the way. Not every video editing application can do deinterlacing well, and sometimes we can be better off by keeping the scan type as is. In cases when you need to apply noise reduction and also have to change the scan type, it is a good idea to let noise reduction go first, at least with Neat Video. Otherwise, some data may be lost in the process of deinterlacing and that may result in worse filtration quality and further detail loss. Let Neat Video work on the original video data in its original format for the best results.