When working with high-resolution video (like UHD and higher) or when your computer struggles to provide sufficiently high processing speed, video editing can become a tedious and extensively long process. Add heavy effects to this mix and Final Cut’s playback and preview update will get even slower.

These abnormalities don’t happen all the time but are usually triggered by certain activities. Here are some examples:

You can see choppy playback with skipped frames:

Slow updating of preview in Final Cut can happen:

There are several key reasons why such kind of sluggishness can happen:

The good news is there are ways of making video editing less annoying and more enjoyable for you. Let’s the story begin!

Things always work better if you get the main settings right from the beginning. Every time you start working on a new project that needs denoising, it is worth making sure that Neat Video is set to use optimal hardware parameters. That will allow the denoiser to achieve the best performance.

In FCP X's Inspector panel, go to Neat Video’s Options window, then to the menu Tools > Preferences > Performance > Optimize Settings…  and click Start. When the test is complete and you see the best speed Neat Video can achieve on your computer (please keep in mind that the number of the FPS in this test shows the maximum speed that Neat Video can reach without the overhead of Final Cut and other effects using the same resources), click the Accept Best Combination button.

Also check the GPU memory usage reported in Preferences > Performance page. Allowing Neat Video to use too much GPU memory may cause the denoiser and other GPU users (including Final Cut) to hinder each other, which will lead to some extra slowdown. On the other hand, giving Neat Video too little GPU memory will make the filter itself slower. Try experimenting with the slider and see what value gives you better result. The ‘Check speed’ button is helpful for a quick speed estimation. If you need a more accurate measurement (for example, before starting a several hours render), you can also measure the time needed to fully process a short project with Neat Video in Final Cut and adjust settings accordingly.

We have created this video for more guidance:

If you are on macOS 10.15 or newer, you can also check if using Metal instead of OpenCL offers better performance. You can switch the mode in the Preferences > Performance > Advanced Settings dialog.

Rendering is the process of creating temporary video and audio render files for segments of your project that Final Cut Pro can’t play in real-time. When you edit in your timeline and you add a clip that uses a different codec that you're editing in, or you add a color adjustment, keyframe an image, add lower third and other items that require rendering for playback in high quality, the render indicator (a light gray dotted line) appears below the ruler at the top of the timeline. That means the computer may need to process that section of your video before you can play it back smoothly.

By default, rendering in Final Cut begins in the background 0.3 seconds after you stop working and moving the mouse pointer.

The problem with the background render is it can take the lion's share of all computer resources. If you work on a not very powerful computer or with large-resolution video, you won’t be able to do anything else until the process is complete. Even the latest MacBook Pro gets very sluggish when doing background render of a 4K clip.

Rather than allowing Final Cut to start rendering things automatically, we suggest taking control into your own hands. Start rendering certain parts of the timeline only when you need them to be rendered. Don’t waste your time waiting when you have to work on the edit.

If you have two GPUs, their resources can be divided between Final Cut itself and effects such as Neat Video. This can be achieved by going to Final Cut's Preferences > Playback > Render/Share GPU and selecting the GPU to be used by Final Cut from the drop-down menu. The other card will be left available for the needs of 3rd party effects and other GPU users. Such separation can improve Final Cut’s performance and make playback smoother.

As you can divide the GPUs differently between Final Cut and Neat Video, you may want to run some speed tests with different combinations of the Render/Share GPU option in Final Cut’s playback settings and GPU(s) selected in Neat Video Preferences. The fastest combination will depend on your hardware and project. 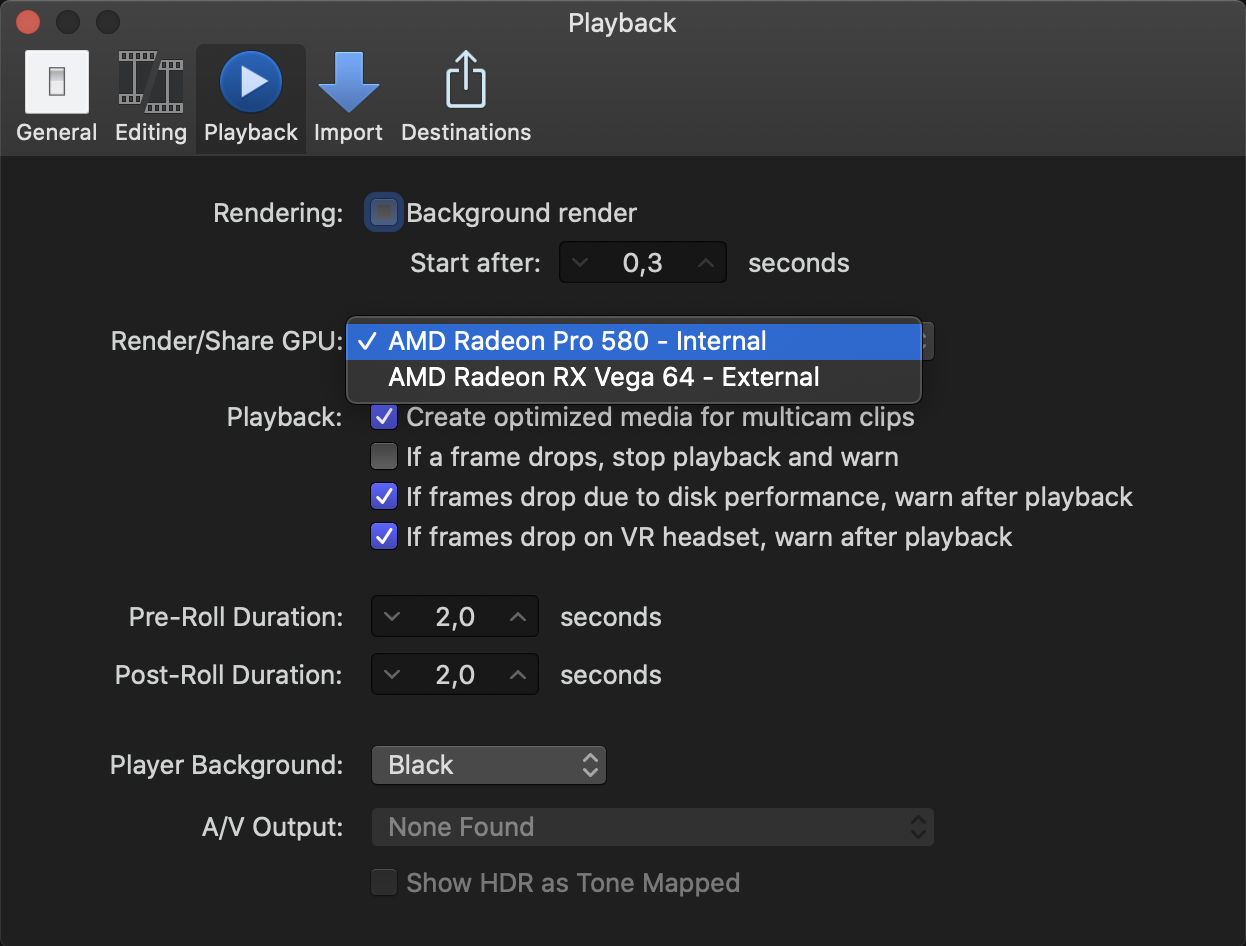 When you want to check your last touches to see how they complement the whole clip, it’s time to play it back. Having background playback switched off to allow Final Cut to be more responsive means you need to start the render process yourself.

To render a portion of your project select the clip or clips that you want to render in the timeline, then choose Modify > Render Selection (or press Control-R).

If you want to render all portions of your project, then go to Modify > Render All (or press Control-Shift-R).

Once the render is done, you can play that selected clip (clips) at full speed in Final Cut’s preview.

Skimming is another option that can suck out a significant chunk of your computer resources. When you work with large frames and have both skimming and background render enabled, Final Cut can become extremely slow. The wait for each frame to be displayed can easily get to several seconds.

On the other hand, skimming is an extremely useful feature of Final Cut. It can save you a ton of time if you are working on a massive project with multi-cam editing.

So if you see that your computer is choking, try turning off both normal (timeline) Skimming and Clip Skimming. You can control normal skimming with the S-key or go to View > Skimming. Clip Skimming can be switched off with Option+Command+S combination or View > Clip Skimming .

Define the required resolution and stick with It

These days almost any modern phone can shoot 4K clips, not to mention professional cameras and their capabilities. However, you do not always need to produce the final video in the same high resolution. For example, large frame formats are not often used in online video platforms. High-res video typically gets heavily transformed by the platform’s video codecs and sometimes gets downsized. It may be sufficient in some cases to upload a lower-resolution version.

At times, you may also need to downsize a clip in the edit, for example, when you bring a larger clip to a smaller-resolution project or when you need to crop a part of the larger frame.

If done correctly, the size reduction can help to speed up the render process because applying Neat Video noise reduction to smaller frames is always faster than to larger frames.

In Final Cut, you can control the size of the frames coming to the project using a Compound clip. For example if you need to bring a 4K clip into a FullHD project:

Another option to avoid a slowdown in Final Cut is to disable the instances of heavy effects or filters (Neat Video's Reduce Noise v5 is one of them) after adding and setting them up in your clip. You can simply disable each instance of an effect using Final Cut’s controls and such a disabled effect will not influence the performance while you continue editing. There is just one important thing to remember though: you have to re-enable each such disabled effect before the final render/export of your project.

Final Cut Pro can play back many media formats, but it doesn’t mean all of them are suitable for editing. RAW files encoded with “slow” codecs can make editing and rendering very sluggish. To avoid that Final Cut offers to transcode to the Apple ProRes 422 format. Using optimized media will allow you to edit faster. The only downside of this option is the relatively large size of the optimized media files that may require some space on your hard drive.

If you have originally large frames and the final product also has to have the same high resolution, then using proxy media can come in handy. When Final Cut creates proxy files they are encoded with Apple ProRes 422 Proxy format and usually are only 1/4 of the size of the original file. That allows to reduce and even avoid sluggish playback and dropped frames.

There are two places where you can transcode media and create proxy files:

All transcoding happens in the background. When the process is complete, Final Cut automatically switches from camera native to optimized files.

When using proxy media, don’t forget to switch back to the original files before the final render or export. Unfortunately, Final Cut doesn’t do that automatically.

Use high quality only when necessary

Neat Video has the Quality Mode: High settings in the Temporal and Spatial filters. Those quality modes can help you get better denoising results (like preserving more details, and reducing more noise) in some cases. These options require longer processing so if you are not sure there is a significant improvement from using that, then leave the Quality Mode at Normal and save processing time and resources for something else.