As both hardware and software continue to improve very rapidly it may seem as though the life of the film creator is getting easier and easier. However, this is not always the case because increasing consumer expectations means the demand for new video content is also becoming higher every day. The bottom line is that we need to get to the results, faster.

In this article we try to offer some recommendations on how to make rendering faster and shorten the overall processing time. To do that, we’ll describe a typical render pipeline first and then give you some tips on how to make it more efficient.

Where does the time go when you render a video?

First, let's have a look at a render pipeline of a video editing application. This is the queue of tasks that most video editing programs follow to go from original media to the output of the final file.

It starts with reading encoded video frames from a video file stored on a local hard drive or over the network. Then, the application decompresses those frames using the corresponding input codec - which reads these frames for further processing. Then it’s time to do some processing, we like this part the most. At this stage, video frames can be modified in countless ways to achieve our creative goals. Frames can be resized, color-corrected, denoised, the speed of the clip can be changed, different effects can be applied, transitions can be added and much more.

Once all the desirable effects and transformations are applied to the video frames, the stream of those processed frames is compressed once again using a chosen output codec. At the very end, the output video file is written to a local hard drive or a network location.

All these steps in the pipeline are organized and managed by the video editing application. The overall render time depends on what happens at each of these steps and the whole is always longer than the time taken by any one of those individual steps. That means if you use Neat Video in a project, the overall render time is always longer than the time Neat Video itself takes to do its part of the work.

When you run the Check Speed test in the Neat Video plug-in (or use NeatBench as a standalone speed test) you’re only measuring the speed of Neat Video itself, without the other steps of the render pipeline. As you can imagine, if you add the time taken by all other steps, then the overall render time will be longer and correspondingly, the overall render speed will be lower than the speed of Neat Video alone. That is normal and to be expected.

To offer some real-life examples, we have done several direct tests with a timer. In the table below you can see the speeds of two similar projects rendered and exported in Premiere Pro CC 2019 and in Resolve 15 when applying Neat Video to a 1080p clip as compared to the speed of Neat Video itself.

For example, if Neat Video’s speed is reported as 40 frames/second by Check Speed, while the video editing application exports/renders at a speed of 20 frames/second, then the efficiency of that application is 50%.

The efficiency depends on a video editing application quite a lot. Here are some figures we measured on our computers:

As you can see the spread of efficiency figures is quite significant. Premiere Pro is a champ in terms of efficient organization of the render process, while other applications may be somewhat less efficient at that task. For example, it takes nearly half as long to render the same video in Premiere Pro 2018 than it does in Resolve 15 (when applying just Neat Video noise reduction to a clip). On the other hand, the newer Resolve 16 shows improved efficiency, which again indicates that the overall render time greatly depends on what is going on inside the video editing software itself, and on how well it organizes the render process.

(We assume that you have already used Optimize Settings to find the best CPU/GPU settings for your hardware and for your project. If you haven’t, then please do that first and then measure the speed using Check Speed.)

Next, render/export that clip in the video editing application and measure the time it takes to process the whole clip. Then calculate the number of frames in the clip by multiplying the length of the clip in seconds to the frame rate of the clip. For example, 10 sec x 25 fps = 250 frames.

Then divide the number of frames by the measured render/export time (in seconds). This will give you a figure for the overall render/export speed of the video editing application (in frames per second).

Now divide the overall render/export speed you got in Step Two by the speed reported by Neat Video in Step One. Multiply it by 100% and that’s the efficiency of your video editing application. Compare that efficiency to the results in the table above.

How does it compare? Is it roughly similar to the figures in the table? GOOD! Is your measured efficiency number significantly lower? Then keep reading and we’ll present you with some tricks that may help to improve efficiency and thus shorten your overall render time.

There are several ways to go about shortening render times. Some of them are general while others depend on a specific video editing software package.

Make sure Neat Video is optimized to use the right number of CPU cores and GPU(s). Run the Optimize Settings tool: Neat Video window’s menu Tools > Performance >  Optimize Settings… Run the test in that dialog and then choose the best combination you find. This will ensure that Neat Video itself achieves the best possible speed for your hardware.

Verify that the GPUs in your computer are connected to the fastest PCI Express slots (refer to the documentation of the computer/motherboard if necessary) to achieve the best possible performance. Make sure the latest version of the GPU drivers is installed.

After making any changes in hardware setup please re-do the optimization described in point 1.

3. Reduce frame size according to your needs

For example, if your source video is 4K, but the output will be a 1080p clip, then it may be a good idea to resize the video before you apply any effects. Neat Video will process 1080p frames about 4 times faster than 4K frames. Check the resolution of the frames sent by the video editing application to Neat Video for processing using the main window of the Neat Video plug-in (see the frame size indicator under the viewer). 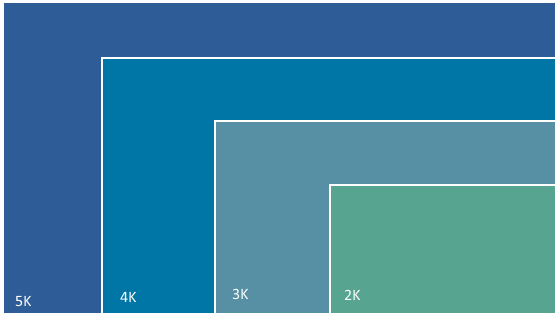 If the input video is encoded with a “slow” codec or if it's a RAW video / set of frames, then it may be useful to transcode the video with a faster intermediate codec such as Apple ProRes, Cineform, DNxHD or something similar. You may want to try different codecs for that role to find the fastest one.

In some video editing applications, such as FCPX for example, you can simply request the application to optimize the source video during import and it will do the transcoding for you automatically.

Working with source video clips encoded with a faster codec may significantly improve the efficiency of the render process because it will not waste a lot of time using a slow codec component.

Sometimes it may be necessary to ensure that Neat Video and the video editing application do not compete with each other for the GPU memory. You should look into this if you see one or more of the following signs: 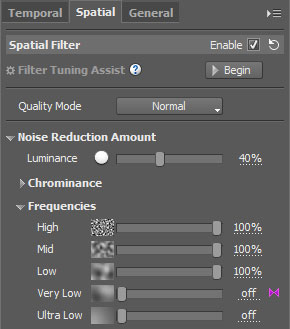 Some background processes (for example, web browsers) can use a significant amount of available system resources including GPU memory. Closing down such processes is a possible way to avoid losing speed unnecessarily.

11. Use a lower bitdepth when possible

It is best to place Neat Video above/before other effects, especially above Lumetri and Warp Stabilizer because those effects are known to slow down processing and may cause stability issues when being applied above/before Neat Video.

If you have done everything possible to speed up rendering but the efficiency is still significantly lower than the figures indicated in the table above, then it may be time to upgrade your hardware. Check our recommendations on choosing the right CPU and GPU.

Keep Neat Video up to date

We hope that the tips above will bring you closer to a polished final result much faster -- allowing you to focus on more important things!  However, keep in mind that Neat Video is also continually improving. With every update, we focus on making it compatible with more GPUs and the latest video editing applications. We never stop working to improve the speed and to overcome known issues. So, remember to keep Neat Video updated to benefit from these efforts.